Dune: A Game of Conquest and Diplomacy

After all these years, and despite owning an original copy, I still haven’t managed to get together the optimum six players for the classic game of Dune. Which is why I was surprised and pleased to be told of this new, streamlined version by Gale Force Nine (who also re-released the original game in 2019). I was excited to see it could be played with two, but like many, I was also confused. Was this a revamp? or a new game?

Well it’s still Dune, but with a few changes, a lot of streamlining, and a laser focus on speed and playability. The confusion isn’t helped by calling it ‘a game of conquest and diplomacy’, because apart from the usual table talk, there’s not much in the way of diplomacy here. The game is short and aggressive, especially with two players, with a very limited amount of turns in which to pull off a win. Dune: A Game of Conquest probably would have been more appropriate!

That doesn’t mean it’s still not a great game however, in fact it has quickly become one of my recent favourites, and the perfect short game to finish off an evening’s gaming.

But instead of repeating myself I’ll direct you to my video review, which covers the game in comprehensive detail. Check it out! In addition, here’s my rules summary and reference to help you learn and play the game. 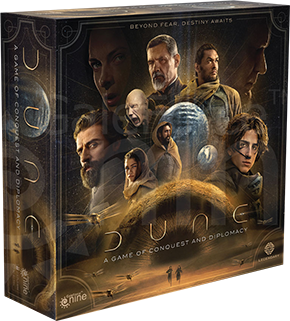