A game of conquest, diplomacy and betrayal.

I’ve had the classic, original 1979 Avalon Hill Dune sitting on my shelf for quite some time now, but for some reason I’ve never had the opportunity to get enough players together to play it. While you can play it with a smaller number, it really is at its next with 6 players, and that’s a difficult number to get around a table.

Reprinting Dune has been a holy grail for many publishers for a long time, but up until now the estate of Frank Herbert has made it impossible. Fantasy Flight had to retheme the game when they released what was called Rex: Final Days of an Empire in 2012. Perhaps it’s with an eye on the upcoming Denis Villeneuve movie that the estate finally gave its approval and Gales Force Nine got the prize.

Like Cosmic Encounter by the same designers, the meat of the game comes from the interaction between the different factions: the game is intimately linked to its theme. There’s are many opportunities for player-led alliance and backstabbery, a feature not often seen in modern games. I don’t have a copy yet, but it looks like a nice revamp, with a slight 70s feel in homage to the original book and game, and a respectful eye to keeping the changes minimal apart from a shorter play time and some clarifications.

My summary includes the rules from the recent expansion, Ixians & Tleilaxu. 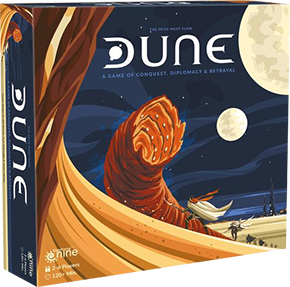