Wizards of the Coast must have made Scrooge-like mountains of those pre-painted Dungeons & Dragons figures, because here is yet another game system that uses them (and even repeats some of the sculpts already supplied in games like Castle Ravenloft). It’s easy to be cynical about them churning out another game to get rid of the inventory backlog, but Dungeon Command does have a lot going for it, despite the looming shadow of company bean-counters over the whole operation.

Dungeon Command is a pure miniatures skirmish game played with opposing warbands on a small set of dungeon tiles. The main innovation here is that there are no dice: players have a hand of Order cards to control their creatures, so there’s a greater level of tactics on offer than in your usual skirmish game.

And as an added bonus, they even supply creature cards compatible with the D&D adventure games so you can use the miniatures in those dungeoncrawlers.

The system didn’t last too long on the market, probably because of that fine print on the cover of each ‘faction pack’: contains everything 1 player needs to start playing! Yep, you’ll need to buy a pack each if you and a friend want to set your little plastic creatures at odds. As such it was considered over-priced and after five faction packs the line was no more. Yet it still remains a quick and easy entry into tactical skirmish-level miniatures games, and most entertaining at that. 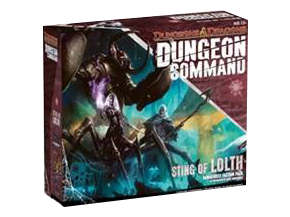