Take on the role of the legendary drow ranger or one of his famous adventuring companions, battle fearsome foes, and win treasure and glory.

The third Wizards of the Coast dungeoncrawler boardgame after Castle Ravenloft and Wrath of Ashardalon continues to milk the cash cow by churning out a bunch of re-purposed D&D figures, some uninspiring dungeon tiles (caverns this time) and cards lacking illustrations, this time wrapped around the story of the amusingly-named Dark Elf hero Drizzt Do’Urden. Very little has been added rules-wise since the second game. I find these games somewhat bland, especially in the graphic design and art department, but their success is probably due to the appeal of fast, easy dungeon-crawling and a whole bunch of cheap figures in a box.

I gave up after Castle Ravenloft as the next two just seem more of the same, but in response to requests, here’s another rules summary! 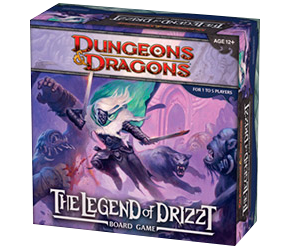