Galactic conquest in the 41st millenium

Recycling some mechanics and ideas from an old FFG favourite, Starcraft, Forbidden Stars is a return to that style of big, strategic, settle-back-for-a-few-hours dudes-on-a-map kind of game that the company used to release in big ‘coffin’ boxes. It’s a refreshingly streamlined return as well, though the combat system can be a bit fiddly and time-consuming and is perhaps better suited to a two player environment than three or four. Lovingly garnished with lots of grimdark and gothic Warhammer 40,000 flavour, and graced with stunning plastic pieces for Space Marine, Orc, Eldar and Chaos factions, it’s worth setting aside a few hours and immersing yourself in this galactic struggle. 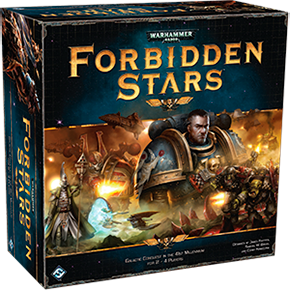