Outside, thunder crashes, and the relentless hunter Van Helsing flinches. In that instant, his quarry strikes!

Fantasy Flight Games wisely resurrected this undead classic in 2006, and the reprint still has the magic of the old Games Workshop classic. Several important changes have been made, but it still beautifully blends gameplay and theme.

Fury of Dracula lets you wield Dracula’s evil influence over Victorian Europe as you move from London to Transylvania and everywhere in between, laying traps, setting red herrings and delaying tactics, gathering and unleashing your human and animal minions—all to thwart Van Helsing, Mina Harker, Lord Godalming, and Dr. Seward as they follow hot on your heels. The Dracula player uses an ingenious system of cards to lay down his trail, but all his movement is done in secret. It’s that secret movement, and the fun of putting horrific obstacles in the path of the other co-operating players, that makes being the Dracula player in this game such a huge amount of fun. You’ll gloat, cackle and make mw ha haaa haaaaa noises as you set down each card, watching the other players desparately try and beat you to the next location to drive a stake through your heart.

Every gamer should have a copy of Fury of Dracula in their collection, and it’s my personal favourite for Halloween gaming. 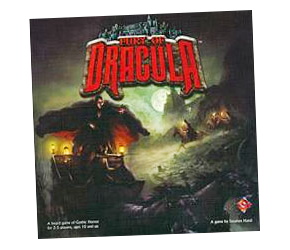