A game of deduction and gothic horror

Hello again Fury of Dracula! When I first heard that Fantasy Flight Games was releasing a third edition of this classic deduction and secret movement game, I initially thought ‘leave it alone already!’, but I’m happy to report I was completely mistaken. The combat system has been simplified and streamlined, the turn structure improved, balance tweaked, and rules bloat introduced in the last edition has been largely excised. Some small changes ramp up the tension towards the end as Dracula gets a bit more powerful. In fact it’s reminded me that I didn’t really get the second edition to the table very often; not only because the game was drastically changed from first edition, but that the changes made the game an unwieldy beast. It’s still long, but this an evening’s experience, not a light filler.

This is without doubt the best version of the game so far, and an essential addition to every boardgamer’s library. It just feels right. And that special atmosphere of gothic horror the game has always had is still there, thanks in part to excellent graphic design and illustration. Sure, there was some outcry at the ‘laughing Liberace’ on the cover, but the game itself has matured into a wonderful balance of deduction, threat, and tense choices. It’s a cat-and-mouse chase that’s particularly good at giving the Dracula player a chance to practice their evil cackling and gloating skills. What are you waiting for? Get yourself a copy. 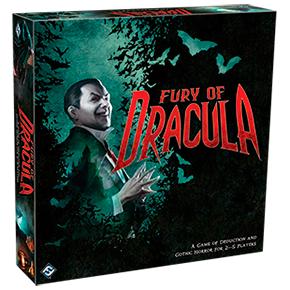