The Horus Heresy: Betrayal at Calth

A miniatures game of desperate battle in the 31st millenium.

It’s saddled with a ridiculously unwieldy name and the price is punishing, but this re-entry into the world of standalone boardgames by Games Workshop caused quite a stir, with some saying it heralded the return of the much-loved ‘specialist games’ of the late 80s and early 90s. It’s not quite that interesting of course, but there’s a lot of space marine miniatures, a simple but effective miniatures skirmish system with some special cards to shake things up a bit, and enough fun in the box. You do have to be a bit of a miniatures hobbyist though as there’s a lot of assembly and painting to be done before you start enjoying the game.

Many GW fans bought the box, kept the miniatures and sold the game components, which is how I bought the game as I already have enough old space marines lying around to effectively proxy the included figures. 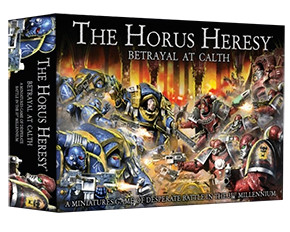