Monsters spring from the innards of the earth! Only has handful of warriors stand between these impious creatures and the rest of the world.

Hybrid is a tactical skirmish boardgame in the vein of Space Hulk, but more tactically complex. The miniatures and graphic design are stunning; at the time Rackham was known for its beautiful metal miniatures, and the game comes with an impressive collection of them. Despite its flaws—a terrible rules translation, ridiculously tiny type on the cards, confusing artwork on the tiles—the game brought new complexity and richness to the genre, and the fantasy background is unique.

The terrible English translation of these rules is almost legendary, which is a great shame, as once you work it out Hybrid is a unique take on the combat game genre. The game is set in the Rackham fantasy world of Aarklash (which is the setting for Confrontation, their tabletop miniatures game, Arcana, and Cadwallon: City of Thieves) and simulates combat scenarios between the Griffons of Akkylannie (the good guys) and the frightening Alchemists of Dirz (the bad guys) in the latter’s abandoned underground laboratories. Unusually, the game comes with thirteen extremely high-quality metal miniatures that required assembly and painting, including a spectacular ‘Aberration’ miniature, a mutated experimental creature. The artwork on the game tiles is also exceptional, if a little confusing, and fully painted and setup the game is a sight to behold. Unfortunately the text on the action cards is also amazingly tiny and hard to read, and the activation counters were strangely printed on ridiculously thin card.

Without doubt, however, the rules book is a nightmare, and it’s hard enough working out who is who and what is going on, let alone piecing together how the game works. But once you do—and I recommend you use my summary (which includes the rules from the supplement Nemesis), which several gamers have called ‘essential’—you’ll find Hybrid to be a fast, furious and vicious combat game with a wide range of tactical options. Warriors can choose from a number of action modes, and up to six actions within each mode; not to mention use cards with extra abilities or modifiers. Throw in a set of varied and interesting scenarios, and for those of you who are ready to take the plunge, it’s an amazing game once it all ‘clicks’. Hybrid is out of print now, but it’s well worth tracking down a copy if you’re looking for something unique that rewards a bit of effort. 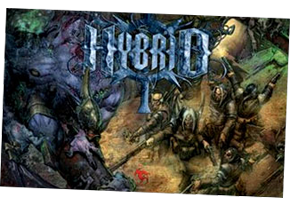