Hunt for the Ring

A game of hidden movement, deduction and adventure.

Since War of the Ring is my favourite game, it really was a no-brainer for me to grab a copy of Hunt for the Ring, created by two of WotR’s designers and one of the designers from Letters From Whitechapel. And while I’ve only had the time so far to play part 1 of this game (the game is broken into two similar but different parts, played on the two sides of the board), I can already see this one is excellent.

Of course it’s very different from WotR, focussing as it does on Frodo and his companions running from The Shire to Rivendell, pursued by the horrible Nazgûl, and played with the hidden movement mechanics familar from games such as Letters From Whitechapel and Fury of Dracula. However some other elements, like the Nazgûl action dice, echo its big brother, and you can even play the games in succession, modifying your WotR game slightly depending on the results of this one.

It’s also a beautiful game. The head-and-shoulders miniatures on brightly coloured pawns may polarise opinion, but they are different and interesting, but the rest of the artwork is gorgeously thematic.

Hunt for the Ring may feel relatively light at its core, but there’s still a lot going on here, and it’s further shaken up by the division into two parts, each of which feels like a full game in its own right (there’s even a cute ‘Gandalf’s envelope’ to store your pieces in between the two games). In the second part, Frodo and his companions must follow a pre-determined route with Strider, while Gandalf distracts the Nazgûl.

If you’re a fan of hidden movement games and the Lord of the Rings theme, grab this one. The rulebook is comprehensive and may seem a bit complex at first read, but you’ll find this summary and reference pares thing down to the essentials and will help you get into the game. Now fly, you fools! 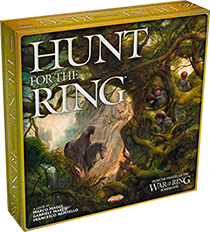