I was contacted by Gamewick Games while they were running their Innsmouth 32 Kickstarter (you can see my Action Points preview here) , and was instantly drawn in by combination of Lovecraftian card play and the great comic book art. They were kind enough to send me not only that game, but the earlier two games in their ‘Shuffling Horror’ (great name!) series.

This is a game system that fully embraces the cinematic theme, revelling in the whole meta aspect of a director dealing out ‘reels’ of gameplay to the movie participants. Starting with Pittsburgh 68 (Night of the Living Dead and zombie movies in general) in 2012, continuing with Roswell 51 (50s alien invasion movies) in 2017, and now with Innsmouth 32 (Lovecraft and 1930s investigators), Gamewick have tweaked and improved the system and the production quality with each new release. Innsmouth 32 looks great, with very atmospheric and dynamic artwork by James Daly (who also worked on Rise of Cthulhu).

The games in the Shuffling Horror series really place an emphasis on the skills of the Director player, who acts somewhat like a Game Master in a roleplaying game and has various tricks up their sleeve to enhance the cinematic nature of the whole experience. In the meantime, player ‘survivors’ fight against monsters, gather items, and investigate to get mythos points. You can even hide in a sanctuary while monsters try to beat down the doors to get in, and if you get killed your survivor can become a monster player!

This is the kind of game that is definitely better with more players, and unfortunately I received my games right in the middle of the pandemic, so lately getting enough gamers around a table to do this game justice has been challenging. In the meantime however, download my rules summary and reference below, and as soon as I get a chance to play the game with a decent number of players, I will share my personal opinion about the Innsmouth 32 experience! 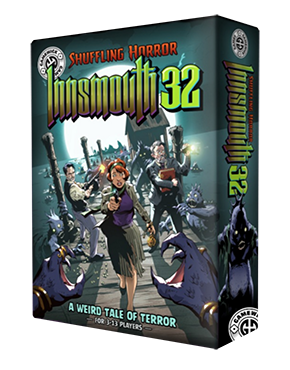