A card game of influence and horror for 2 players

Chuck D. Yager ran a Kickstarter campaign for this tasty little card game a while back, and followed up with a small expansion. It’s a simple set-collecting game, and while the Cthulhu theme is a tired one, the Mike Mignola-influenced artwork is gorgeous, making Rise of Cthulhu an attractive adddition to the ranks of quick and fun two player card games. Oh, and it’s nice to be on the side of the cultists instead of the investigators for a change. 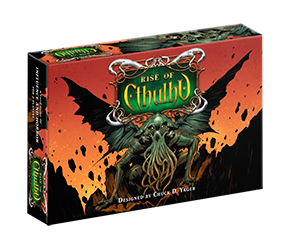