Time of Legends: Joan of Arc

An age of knights and squires, religion and superstition.

After spending a horrifying amount on this game, and the most shipping I’ve paid on anything in my life, it was with some trepidation I awaited the final product—would the game be worth the money? Well, to anyone who doesn’t enjoy these kind of miniature-heavy battle games it probably isn’t, but I do, and to my great relief, I can say after several games I really enjoy the system. It’s like a medieval Memoir ’44, and I reckon that’s high praise indeed!

Personally I love the small scale of the miniatures because you can get a real sense of large armies clashing on the tabletop (though painting all those little guys can get a bit tedious). The activation system gives you interesting choices, and you can choose between historical battles of the Hundred Years War period, or ones with involving supernatural forces and monsters. And since your characters can hold ‘conversations’ with various side characters like priests and blacksmiths, stories really emerge from the gameplay. In our play of the Battle of Crécy scenario, Edward III spent a ridiculous amount of time chatting with the local blacksmith, to our amusement and his eventual detriment!

The Apocalyse and Siege expansions add astounding Book of Revelations battles and siege warfare and castle walls to the mix. And I’m very pleased to hear that Mythic have committed to really supporting this game system for a long time to come. Great stuff. Eventually, I can definitely see myself succumbing to the temptation to get that huge legendary dragon ‘miniature’ (update: I did!) 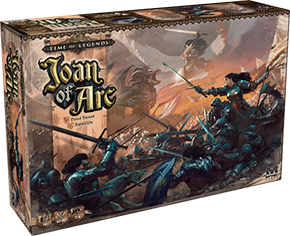