An epic board game of WWII tactical combat in the deserts of North Africa, on the beaches of Normandy, in the expanses of the Eastern Front, and beyond.

A friend reckons it’s ‘Squad Leader-light’, but this big box WWII squad level combat game from Fantasy Flight is a faster, simpler system with a good dose of strategy—and lots of plastic army men! This comprehensive rules summary and reference sheet has a customised side for the American, German or British player, and a special Combat reference sheet.

Recently, FFG passed this game licence on to 1A Games, who, after some mucking about on Kickstarter, released a Stalingrad expansion and re-released the original game. At the moment, sadly, Tide of Iron is out of print. 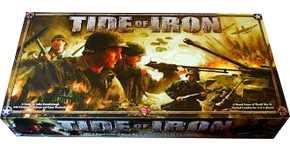