Do you have the power to change destiny?

Neophyte Hong Kong-based publisher Marrow Production ran a successful Kickstarter for this Heroquest-like game back at the end of 2013. Unfortunately, they only delivered the core set, and it looks like backers (including me) will never see the extras they were promised and expansions they paid for. I do feel they set out with the best of intentions, but inexperience and economic reality meant they defaulted on their promises and backers lost money. So this big box of large-scale, beautiful miniatures, and a pretty straightforward minis-on-tiles boardgame in the style of Heroquest, is all we’ll be seeing from them.

The game is not pushing any boundaries, but it’s nice to see a game with an Asian theme that goes beyond the usual ninjas and samurai. It’s based on the 16th century Chinese epic Journey to the West, probably more familiar to many via the cult Japanese TV show from the early 80s, Monkey, which I used to watch as a teenager. A Buddhist monk and his companions fight demons, basically. It does make a nice change from wizards and orcs.

Marrow, if I may run with a metaphor, definitely bit off more than they could chew and left a bad taste in people’s mouths. We’re left with yet another Kickstarter disaster story, but some undeniably impressive and high quality miniatures. 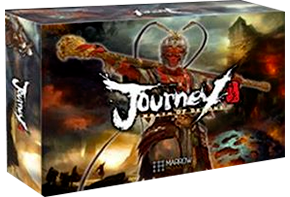