Embark on high-stakes missions with teams of elite operatives.

I played the last version of Kill Team only once, and found it … unsatisfying. Perhaps Games Workshop felt the same, because this new version is a completely different rules system. While the last seemed unbalanced and slow, this one simplifies things and puts a bigger emphasis on stealth and ease of play.

One thing the last version had was some fantastic ruined building terrain, and with the new release time they went with a pile of ramshackle orky constructions, though the large set that included them was too rich for my blood. So I thought I was going to miss out on this version until GW came out with this smaller starter set and sent me a free copy. The terrain supplied is minimal, but you still get the two kill teams: Veteran Guardsmen and the Ork Commandos, and of course the miniatures are the usual exceptional quality.

As for the game system, it’s pretty simple and straightforward, with the main innovation being an engage or conceal order you play on your ‘operatives’ (as the game calls them) when you activate them, which modifies requirements for cover. That means there’s more emphasis on sneaking up to your objectives before the shooting starts. Thankfully, we’re not wedded to the creaky old ‘roll to hit, roll to wound, roll to save’ system here, and I’m really starting to wonder when GW are going to bite the bullet and finally retire that longwinded process in their main games. Instead it’s just ‘roll to hit and roll to defend’, with an emphasis on the possibility of critical hits that do more damage, and some light player interaction, especially in melee combat where you can choose to strike or parry. Extensive special abilities and modifiers aside, it’s a fast, easy little system.

Not so easy and fast is a new system of breaking movement into icon-coded chunks of distance, a system that someone probably thought would be ingenious but instead just introduces a bit more confusion, not helped by some poor icon design choices. It is effective in the confines of the Into the Dark set however, where the natty little range templates are perfect for placing in confined corridors.

But on the whole, this is definitely a big improvement over the last version, though we are again stepping onto the expensive treadmill of having to buy a succession of separate books to get information about new teams, a system pioneered by Necromunda that probably brings in more revenue but to me, reduces enthusiasm for expanding and playing the game due to the constant expense. There are so many good skirmish games on the market these days, competition is very high for the most fun, but if you’re a Warhammer 40K diehard, this is the one for you.

Here’s my rules summary and reference: version 2 now includes a few additional rules from the Into the Dark set. 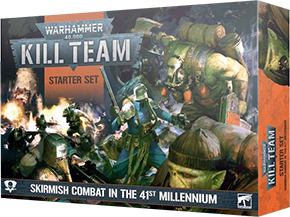