Skirmish combat in the 41st millenium.

I was quite excited when this boxed version of Kill Team came out; there have been skirmish rules for Warhammer 40,000 for quite some time, but this new version is excellently packaged and comes with a couple of teams and a heap of really nice ruined buildings (there’s a new version out now featuring Tau). There are also many expansion packs featuring teams and terrain, and a Commanders expansion.

I was a bit less impressed when I got it to the table though. Despite the complex lists and fiddly point values the teams I devised to play with were terribly unbalanced, and the Deathwatch marines wiped the floor with the Tau (see the battle report here). I was also disappointed (but not surprised) to see the old ‘roll to hit, roll to wound, roll to save’ system featuring again, and it seemed that there was a lot of dice rolling and very little actual damage being done.

However, Kill Team really isn’t for very casual players like me. The Age of Sigmar skirmish game Warcry handles things far better in this regard, with a simplified, high action system with less dice rolling. Kill Team is more targeted towards existing W40K players who like to carefully build army lists and hone them over repeated games, and perhaps mix up their full-scale W40K battles with the occasional skirmish game as part of their campaign narratives. It demands an investment of time and dedication that I find a bit difficult to devote to any one game these days.

In the future I’ll get it out and play some more games (though this time I might give the Deathwatch a miss), and hopefully discover its charms. But I wonder if we’re yet to see a Warcry-like system coming for the W40K universe?

This summary and reference includes the relevant rules from the Commanders expansion. 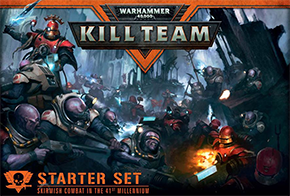