In the vast, forbidden seas of space … terror stirs …

I may have mentioned once or twice I’m a bug fan of (most of) the Alien films, and it doesn’t take too much imagination to recognise it’s a great theme for a boardgame. In fact, two have been released recently: Nemesis by Awaken Realms, and Lifeform by Hall or Nothing Productions. They are both excellent games, and luckily, they both approach the subject matter differently. In fact I think I can neatly sum up the difference by saying that nemesis is Aliens and Lifeform is Alien. Both classic films, but if you’re looking for that authentic original movie experience, this is the one.

Lifeform achieves this by making the game an alien player-vs-crew players experience, and recreating the tension of the film with semi-hidden movement (there can be 2 or 3 ‘sensor ghosts’ on the board, and the crew don’t know which is the actual lifeform) and by making the lifeform truly deadly. If you walk into the wrong room and you don’t have the right cards in hand, you’re alien food. Coupled with a rampaging robot, a deadly endgame aboard the ship’s shuttle, a self-destruct countdown, and even a ship’s cat, you’ll find yourself thrust into the movie’s exhausting and exhilarating blend of tension and horror in two shakes of an alien’s tail.

I particularly enjoy playing this game on the separately available play mat. It’s the same size as the gameboard, but there’s something about playing on that mousemat material that enhances the game, and the print quality is excellent.

There’s even more to explore after the base game though. The expansion Thirteenth Passenger adds some new characters, an endgame shuttle board, and the extra threat of getting the ship through an asteroid field. Dragon’s Domain adds extensive rules and components for a fully developed solo experience.

There’s a lot of icons in Lifeform, and the supplied reference sheets are rather large, so I think you’ll find this compact rules summary and reference particularly useful. Enjoy. And don’t, whatever you do, forget the cat. 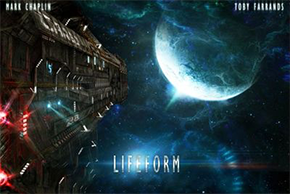