Since their first grim, confronting production This War of Mine, Awaken Realms have been releasing a series of ever-more-impressive games with some equally impressive Kickstarter numbers behind them, and they only seem to be increasing the pace. Lords of Hellas raised an incredible £1,700,00 or so on Kickstarter, so obviously its theme mixing scifi, fantasy and ancient Greece appealed to many, but it didn’t grab my imagination at first. However the game has stood the test of time and received great reviews, so I finally gave in and bought the retail version.

And you certainly get a lot in the box: some huge miniatures, a big double-sided board, and piles of brightly-coloured cards and cardboard. I only wish I could find a copy of the terrain expansion now so I can replace my cardboard temples with miniatures!

I haven’t yet managed to get Lords of Hellas to the table, but I hear it’s an enjoyable area control game with multiple win conditions. You can choose to conquer lands, build unfeasibly huge monuments (the giant miniatures for these come in multiple pieces), or slay epic monsters to achieve victory. The play time is reasonable for this kind of game, and there’s a lot of variety and choice in your actions. And … there’s lots of plastic to push around!

With the recent release of the stunning Nemesis, and the more story-oriented Tainted Grail and Etherfields on the way, Awaken Realms games are becoming must-buys. 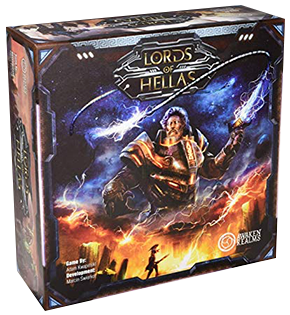