The Lord of the Rings: Journeys in Middle-earth

A board game of adventure and exploration.

This latest app-driven game from Fantasy Flight Games sends players out into the wilds of Middle-earth on a campaign of combat and investigation. Very much in the Mansions of Madness line, it’s a tempting and attractive package, though I do find myself somewhat less interested these days in hand-holding apps and craning my neck sideways to look at an iPad screen when I’d really just prefer to concentrate on the game bits on the table. It’s not something you can really just dip in and out of either, as the campaign is designed to be played from go to whoa.

Regardless, there will probably be a tsunami of expansions as usual. Perhaps the game will grow into something special, but for now I’m happy to play it occasionally without my usual investment of time and money.

Making these game aids takes time and money. If you find them useful, please consider becoming a regular supporter (via Patreon, or directly), so I can continue making high quality tabletop gaming content. Thankyou!
The Lord of the Rings: Journeys in Middle-earth Rules Summary & Reference v1.2 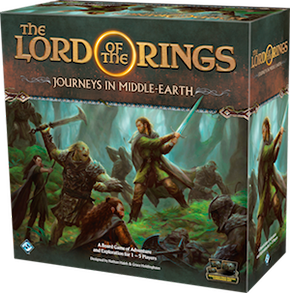