Face-off in stylized battles of some of the most famous historic battles of World War II including Omaha Beach, Pegasus Bridge, Operation Cobra and the Ardennes.

The WWII light strategy game Memoir ’44, created by Richard Borg and and first released in 2004, is still one of my all-time favourite games. Memoir’44 never fails to entertain and engage, and is the perfect introduction into more complex historical wargaming. Based on Borg’s popular Command & Colors system, the game board is split into three sections, and the play of various cards activates units in these sections to move and attack. With a wealth of historical scenarios, extra rules and expansion sets—and of course the joy of moving little plastic army men around a large board divided into big hexes—Memoir ’44 should be in every gamer’s collection.

The base game covers the D-Day invasions and comes with German and American troops, but additional sets like the Eastern Front Expansion, the Pacific Theatre Expansion, and the Mediterranean Theatre Expansion supply Russian, Japanese and British troops respectively, and make possible the recreation of battles and campaigns throughout WWII.

Talking about campaigns, Campaign Book Volume 1 is a fantastic hardback collection of over 50 battles linked together into three campaigns: The Battle for Normandy in the summer of 1944, the Blitzkrieg to the West in 1940, and Operation Barbarossa on the Russian Front in 1941.

The flexibility of the Memoir ’44 system means that it can be played in several different exciting and unique ways. The Operation Overlord expansion, coupled with huge Overlord pre-printed battlemaps like Hedgerow Hell, Sword of Stalingrad or Tigers in the Snow, lets you play a battle royale with up to 4 players per side. I’ve played Memoir ’44 in this way with six players and it was a memorable game, I can assure you.

Breakthrough is an expansion that features four oversize, long boards that expand scenario possibilities, and the Air Pack (since replaced by the New Flight Plan expansion) includes airplanes that bring the skies above your battles alive.

All in all, Memoir ’44 is undoubtably the premiere light WWII wargame system; a game with just the right level of complexity to keep things interesting, but simple enough to introduce to young players and inexperienced gamers alike. And it’s also an educational experience that teaches a lot about the battles of WWII.

v3.8 is the last version of my original summary, that includes rules summaries of the core rules, the Air Pack and Overlord rules, and reference sheets covering all the expansions. I’ve left this here in case you’re still using the old air rules, but it will no longer be updated. The reference sheets were originally based on a design by Malcolm ‘Brummbär’ Green.

v4+ is the updated version, which replaces the old air rules with the New Flight Plan rules, and improves and consolidates the reference material on only two, albeit larger, sheets. It’s the only way to play Memoir ’44! 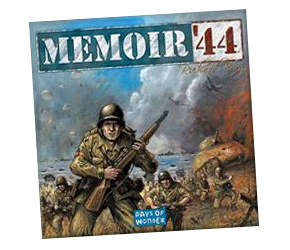