One for all, and all for one!

Who doesn’t love some 17th century-themed swashbuckling? This semi-cooperative (Milady vs the Musketeers, though it can also be played solo) game based on Alexandre Dumas’ story Les Trois Mousquetaires has all the ingredients for the perfect thematic romp, but is seriously let down by poor graphic design, cartoony illustration, and one of the worst rulebooks it has ever been my misfortune to summarise. In fact I probably would have thrown up my hands in despair if it wasn’t for the work already done by Boardgamegeeker Wade Nelson, who had already re-written the rules and allowed me to use that work as the basis for this rules summary.

The willingness of companies to spend serious money developing and producing games and then send them out with half-baked, badly-translated rulebooks remains a complete mystery to me. I would have thought allowing any impediment to people enjoying your game would be a poor business decision. But in any case, once you finally decipher the rules – a task that should now be child’s play thanks to this summary – the game looks like a lot of fun and gets good reviews. Though I certainly would love to see it re-released with a complete graphic overhaul – the design is an inconsistent mess and, inexplicably, one of the main tokens is blank! 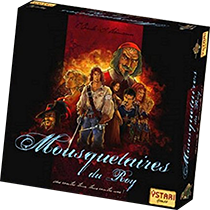