Each of the game’s four factions offers a unique approach to battle.

Fantasy Flight Games probably had high hopes for this 54mm scale pre-painted miniatures skirmish game set in the strange sci-fi/apocalyptic/gothic universe of the Mutant Chronicles. And despite the botched release, the collectible concept, the too-large scale, and the toy-quality figures, it’s a great, fast-playing combat system with interesting variety and a very cinematic feel.

Unfortunately it was short-lived and has since been discontinued. The game system works smoothly, using the core mechanic of specially marked dice. Gang recruitment is easy with a bronze-silver-gold scale of combatant power. Many people weren’t happy about the large 54mm scale of the figures and the quality of the pre-paints, but it’s still definitely worth picking up a copy of the core set and some of the figures if you’re a fan of the skirmish combat genre—and if you can find them. 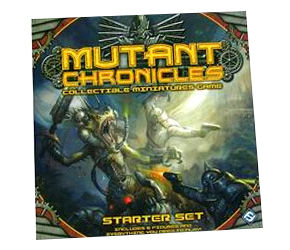