Occasionally I’m fortunate enough to be contacted by a publisher who offers to send me games, but it’s almost unheard of that one of those games becomes a personal favourite. So it was with Mysthea, a game I’d never heard of by a publisher I’d never heard of. However Tabula Games have been running a string of successful Kickstarter campaigns, and I’ll definitely be keeping an eye on them from now on, because Mysthea is an absolute winner.

The first thing that strikes you is the unusual and original art style; then the high quality production and lovely miniatures; but what will really surprise and please you is how deep and satisfying a game Mysthea is. My friend, taking a leaf from video games, described it as an ‘open world’ game, and there’s definitely a feeling of unfettered possibilities when you set it up to play. On the surface, you’re a champion exploring five islands that float above a mysterious, alien fantasy world, fighting monsters and developing your skills. But under that is a tight, fascinating set of Eurogame mechanics that initially seem a little overwhelming, but very quickly flow beautifully and easily. It really one of the most successful blends of theme and mechanics that I’ve every played, and I’ve played it and enoyed it just as much with both two and four players.

More people should know about this fantastic game, so here’s my rules summary and reference to help you learn and play it. I’ve also done one for Mysthea’s companion game, Icaion. Amazingly, there are also rules in the latter game to play the two games together as a total experience. 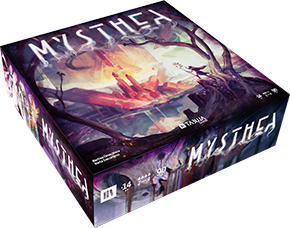