Ruthless combat on a nightmare world in the 41st millennium

It’s great to see Necromunda get so much love from Games Workshop, though they do spread the releases out over a wallet-punishing number of separate books and kits. Over the years, I think I’ve played the game more than any other by the company. So it’s especially exciting to see the game break out of the Underhive and head out into the Cursed Earth – whoops, I mean Ash Wastes – with this release.

Necromunda: Ash Wastes adds vehicle rules to the mix, and if you think they’re streamlined and don’t involve gallons of extra rolls and tables, think again – this is Necromunda remember? The new rules are clunky and long-winded, but despite that, they’re cinematic as hell – just like everything else in this venerable game. And of course they’re specific to different types of vehicles, so you’ll be buying yet more hardcover expansion rulebooks as the new models come out!

But you don’t come to Necromunda looking for fast, simple gameplay, you come to it for insane amounts of crazy detail, about 5,000 D6 rolls per game, and a good laugh when things go arse-about-face and gangers fall off gantries, get run over by motorbikes, and explode into little chunks of bloody flesh. And mixing a bit of Mad Max into the proceedings just makes it even more enjoyable. It’s crazy, frustrating, funny, and old-fashioned, and it’s a great way to spend an afternoon with a like-minded friend. But don’t let me tell you about it, go and watch my battle report!

However, I will make it easier for you. Instead of constantly flipping though the rulebook, just download my rules summary and reference. I guarantee it will be speed up your games by a huge amount; in fact I wouldn’t consider playing a game without it. Now rev your engines and go run something over! 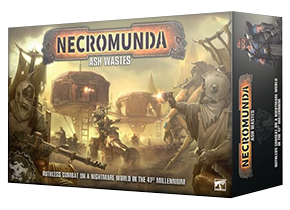