The original version of Games Workshop’s Necromunda is one of my favourite games of all time, so it was with trepidation that I heard of the new version, and then with utter horror that I learned the boxed game was a 2D version played on flat tiles. That’s not Necromunda! But fear not: it’s just a bit of tricky dicky Games Workshop sleight of hand to get you to buy another book separately with the 3D and campaign rules that, you know, basically make Necromunda what it is.

I could whinge about things like that, and the separate gang cards, the division of rules into multiple ‘Gang War’ books, the errors that need a FAQ and errata and are fixed and then reappear again, but hell, you know the drill. Sadly, this has been one of the poorly handled and piecemeal releases of a game system I can remember. But thankfully, they didn’t change too much with the new version and its still pretty much the game we all knew and loved, albeit with a little bit of rules streamlining. Though of course you still roll scads of dice: roll to hit, roll to wound, roll an armour save, roll an ammo die, roll an injury die … this is Games Workshop and that’s not going to change! In fact, despite the very nice new figures, there really is no compelling reason to get the new version if you have the old one.

Not many people still do however, so if you like a bit of old school sci-fi gang warfare, grab the boxed set and the damn over-priced Gang War book and get thee hence to the industrial underhive. Just don’t bottle out!

There are two files here: v1.3 is the original summary and reference I created from the Underhive boxed set, and I’ve left it here if for some reason you prefer it. Since then there’s been a confusing mess of updates and additions, so I completely redid the summary and created v2. I’ve included weapon traits and skills, but left out weapon stats and campaign rules, because if I did include more, GW lawyers would probably be on me like rust on an underhive gangway!

PS: My thanks to Rodney Smith of the fantastic Watch It Played!, who generously gave me his typed rules summary notes and allowed me to use them as the basis for the first version. 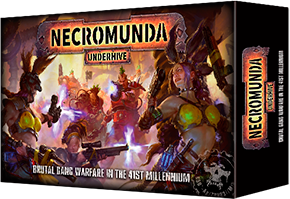