Cycle of Water: Quest Into Darkness.

The original Okko game (Era of the Asagiri) was a simple little tile-based skirmish game with some lovely metal miniatures (sold separately), but this new Kickstarter-funded use of the French property by Red Joker goes full-on boardgame. There’s a bit of investigation as the heroes try to discover which of the palace courtiers is actually the evil master oni (demon), a natty card-based system for varying the stats and abilities of both heroes and bad guys that requires some interesting choices, a good combat system with exploding dice, and a varied stack of scenarios (with even more in the expansions, along with extra miniatures). It’s an interesting and enjoyable game with some clever little systems, and the artwork, design and miniatures are all excellent. Which makes it even more of a shame that the initial release was plagued with rulebook problems that spoiled the experience.

Finally, after a couple of years someone realised that there had been fundamental rules translation errors in the original rulebook. Version 2 of this summary is a complete rework from scratch using these new rules and the last FAQ, and now I think you’ll find it far easier to enjoy this rather good game as it was meant to be played! 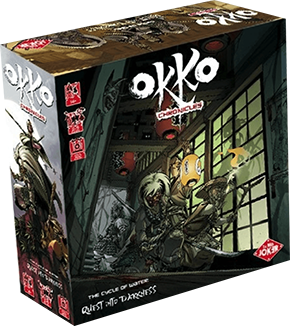