A chaotic game of mischief and survival.

Gale Face Nine released this and Doctor Who: Don’t Blink at the same time, refreshingly compact boxes chock full of thematic, short gameplay. I’ve got a video review coming out for both in a few days, but in the meantime here’s my rules summary (which also acts as a reference) for Pathfinder: Level 20, a clever little game that initially seems light and frivolous, but swiftly gets a bit more thinky – while staying fun, thank goodness.

The theme here is a that a clunky level 19 warrior (or two, one male and one female, with larger player counts) is blundering into a kobold lair in order to score those last few experience points to bring themselves to fabled level 20 status. Which is kind of incomprehensible if you’re not into roleplaying games, but amusing for the rest of us! The players, as kobolds, can run rings around this armoured doofus, laying traps of moss and spoiled food and falling stalactites, but although the warrior’s movement is simply programmed, they do move faster than the kobolds. They’re also a lot tougher, and can’t be hurt, though hilariously, if you wound their pride enough they’ll leave the lair for easier pickings.

Pathfinder: Level 20 is a fast, fun filler – setting up the warrior to slide on a chain of moss until they hit a wall never gets old – but you do have to think ahead and position your kobold carefully, and because the game is semi-coop and the player who takes the warrior’s last pride point wins, a wonderful dose of competition creeps in during the game’s later stages, as players jockey for the right position to snag that last point. I love it, and it’s become my go-to ‘filler’ game at the end of the evening when you want ‘just one more game’ before calling it a night.

For more information, check out my detailed video review of this and Doctor Who: Don’t Blink. 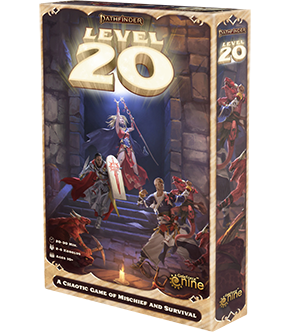