Real-time action to save the world.

There’s something uniquely stressful about real-time games. And let’s face it, I imagine it’s pretty stressful saving the world from horrific and aggressive alien invaders. So the two go perfectly together in Project: ELITE!

This was one of this big CMON Kickstarter campaigns, and I gave it a miss at the time even though I’d heard good things about the gameplay. Since then it’s been hovering on the back of my radar, until I finally decided to grab a copy. And you know, I don’t regret not getting all the extra stretch goals and add-ons, because this game does exactly what I want it to in one box.

There’s a heap of gruesome aliens (which I managed to paint relatively quickly with the aid of Citadel contrast paints) and a team of semi-sterotypical human gun-wielders. The aliens come at you in random waves and while you’re holding back the hordes you try to roll dice to complete missions. So far, so standard. But then of course, the players all have their turns at the same time and in real time!

I’ve only played this with two, but it must be insane with six players. In a two minute turn you’re frantically rolling dice trying to get the right symbols to allow you to move, shoot and complete missions, but every time you roll that alien move symbol the aliens trudge towards you like some inexorable line of Space Invaders. It’s fun, chaotic, and the rules walk that very fine line of being simple enough to work in real time but complex enough to be interesting.

I really enjoy the game, and it doesn’t outstay its welcome; though I must admit I find it slightly stressful. Perhaps I’m getting too old for this kind of thing – my poor heart!

Here’s my rules summary; there’s no player reference sheet, because you won’t have time to look at one! 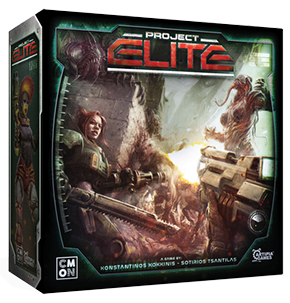