The hero of royal blood will appear, dressed in the armor of the ancient rulers, and take the kings’ throne to stop the anarchy and chaos.

An excellent, ‘classic’ adventuring fantasy boardgame in the mould of Talisman but with more interesting choices, I’m proud to say Universal Head did an extensive redesign of this game (and its two expansions) for Z-Man Games, and I’m quite happy with the way it turned out. We didn’t have room to include this rules summary, but here it is, straight from the game’s graphic designer!

In Prophecy, you battle creatures (and other characters), increase your skills and learn spells at the five Guilds, acquire special items, and eventually may possess enough of ancient artifacts to become the next rightful king. But first you must defeat their guardians in the Astral Planes …

As a special variant, I’ve since redesigned the original board a bit, adding card spaces and changing the background and sea colour. 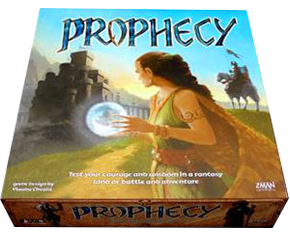