A cooperative board game in which you control desperate sailors in a frantic race against the clock.

A strange little co-operative game about gnomes running about on a submarine trying to stop it from exploding, flooding or being eaten by a kraken. The vaguely Communist theming only adds to the slight tackiness of the whole theme, for those of us who remember a certain sub disaster … still, it’s a very fun and amusing game, and an excellent way to round off an evening’s gaming. The small box is packed full of high-quality components (since re-released by FFG in a larger box). 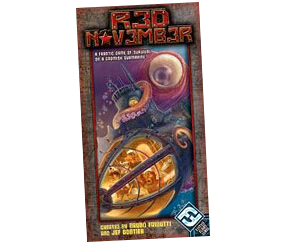