Take down the Vrilmeisters before they can take over the world!

I have a lot of miniatures-on-terrain-tiles games (I suppose you’d still lump them all under the label ‘dungeoncrawlers’) and it’s one of my favourite genres. There’s nothing like well-painted miniatures engaged in heroic combat in atmospheric corridors and rooms, whether they’re in a spaceship, under the ground, or, as in this case, in a Nazi stronghold. Reichbusters: Project Vril is the latest game to go to backers from Mythic Games, and it looks amazing. Sure, the weird war theme is a well-trodden one, but the graphic design, illustration and miniatures here are all top-notch. Coupled with a game designed by ex-Games Workshopper Jake Thornton, and it’s a winner!

Well yes, but with a few caveats. I’ve played Reichbusters five times now, and it’s a frustrating, if very entertaining, beast. This is not streamlined, simple game design and if you don’t like dungeoncrawlers with a high book-keeping element, this won’t change your view of the genre. The stealth element is fantastic, and I think rolling noise tests and then checking the results on a card draw really amps up the tension. Encountering the occasional random patrol and trying to deal with it before the castle is alerted is tense and fun, and the card action system allows for spectacular and heroic bursts of action from your heroes. All good! The problem comes when the alarm goes off, all the enemy tokens are converted to miniatures.

Just when the game should take flight and turn into a fast action-fest, it slows down, and it’s because the enemies get a turn after every single hero turn. And when there are 20 or more miniatures on the board all moving and attacking, that leads to a lot of busy work. By this time your heroes are a bit weaker and have less action card choices, and worst of all, you’re still rolling noise tests in the middle of it all, while the alarm is going off and the whole castle is awake.

I still really like the game and will continue to play and enjoy it; it’s beautiful, exciting, atmospheric and frustrating in a way that challenges me. But I may also start trying to find a way to house rule the post-alarm section of of the game. These are potentially big changes however: consolidating the enemy turns into one would probably cause serious balance issues, but perhaps the post-alarm reinforcements can be determined by a simple system that obviates the need for noise tests.

The original rulebook was confusingly organised and had a ten page errata and FAQ document, and it took me quite a bit of time and effort to make this summary as clear and succinct as I could. Thankfully, Mythic really came to the party by recently releasing a huge, free errata pack that has new rulebooks and components and solves lots of issues. Hopefully this is a sign of better rulebooks in the future from Mythic, but it’s fantastic that they have supported the game so well so long after it originally shipped.

There’s so much good stuff here, and it’s still a lot of fun … it just needs a little bit more polish to make it shine at the end. 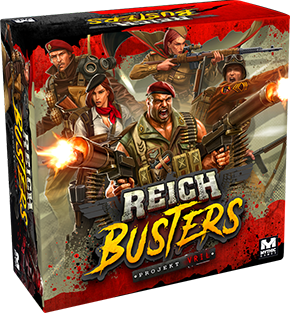