Most rules summaries are relatively easy, if time-consuming, to create, but occasionally I come across a rulebook that is so badly written and laid out that I know you’re in for a long and difficult challenge. Robinson Crusoe: Adventure on the Cursed Island has such a rulebook, which leaves the reader completely discombobulated—and the game’s inconsistent graphic design doesn’t help. I’ve worked hard to massage the rules into what I think is a more useable and comprehensible form.

Which is a shame, as the game itself is universally praised; and personally I think it’s the best coperative game on the market. Instead of just taking individual turns in pursuit of common victory conditions, you really do carefully plan each turn together, as a group. As you get ready to resolve the results each round, you feel like you’ve been gathering around the campfire and making decisions that will actually affect your survival. It’s a surprisingly visceral experience for a boardgame.

Robinson Crusoe: Adventure on the Cursed Island is by Polish game designer and extremely nice guy Ignacy Trzewiczek (Stronghold, Theseus: The Dark Orbit, Imperial Settlers). It’s an ingenious cooperative game of survival on an island; a sprawling sandbox of a game that, with the help of Scenario cards, can simulate adventures based on everything from King Kong’s Skull Island to Darwin’s Voyage on the HMS Beagle. 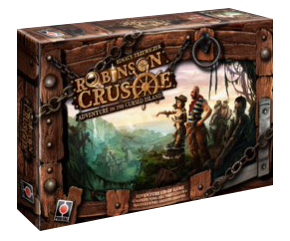