You are the Rogue Trooper, a Genetic Infantryman—one of the last survivors of the infamous Quartz Zone Massacre.

Since a friend spilt his beer over this game sometime back in the late 80s, it has ever after been known as Rogue Drinker. This boardgame offering from Games Workshop—back when they made boardgames—is based on the 2000AD comic of the same name. A sci-fi adventure game that shows its age, but fun to bring out occasionally. 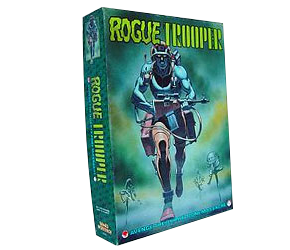