Funded via a Kickstarter campaign that raised over 1.3 million dollars back in November 2013, Shadows of Brimstone is an extremely ambitious release for Flying Frog, in terms of production if not in game design. The usual elements are here—dice rolling for movement, basic combat, lots and lots of thematic cards—so don’t expect anything new in that department. What we do have here is lots of STUFF, crammed into a couple of big, big boxes.

Yes, a couple: there are two ‘core sets’: City of Ancients and Swamps of Death. It’s a strange decision because a lot of content is repeated in both sets. In the game, wild west heroes descend into mines to battle weird beasties, and eventually discover gates that lead to other words: in one core set, an abandoned alien city, in the other, a monster-ridden swamp world. While the mine components do have some differences, it would have seemed a better idea to release one core set and then separate, smaller world expansions; especially since FF don’t supply any instructions for combining the core sets.

Fighting monsters and gathering loot in Shadows of Brimstone is strongly redolent of old school D&D gaming, an impression reinforced by the numerous charts on which you roll random results when you visit the town between adventures. Players cooperate against an extremely basic monster AI that pretty much reduces everything to dice rolls. But despite the lack of tactical choices, this is fun in the same way those old school games were fun: basic monster bashing, huge swings of luck, and gathering experience points to level up.

Thankfully (in my opinion), FF have stepped away from the photographic style of most of their previous games and hired some excellent artists to visualise this wild-west-meets-pulp-otherworldly-horror, and it makes a huge difference to the game. The artwork is top notch throughout and brings the theme vividly to life.

Unfortunately the same can’t be said of the plastic miniatures, which are at the low end of boardgame quality. Supplied on sprues, some of the figures require gobs of green stuff to cover the joins, and the detail on a few of my miniatures was virtually nonexistent. They’re fine for boardgames I suppose, but FF need to work harder to meet the standard of figures in games like Descent, for example. On a last critical note, FF continue the unfortunate habit of Capitalizing Virtually Everything in Their Rulebooks.

Shadows of Brimstone is already polarising gamers: some love the basic dice-rolling, Heroquest-like beer-and-pretzels fun, and some are disappointed by the basic game design and lack of meaningful choices. But we shouldn’t be surprised at the latter, since this is a Flying Frog game after all, and these are the kind of games they love to make. This one really is all about the theme. It will be interesting to see where this game goes with future expansions, but it’s a good bet they’ll just keep throwing more monsters, more heroes, and definitely lots of more cards at it—and given the fact that gates in the mines can lead anywhere in the universe, the universe is the limit for your wild west heroes! 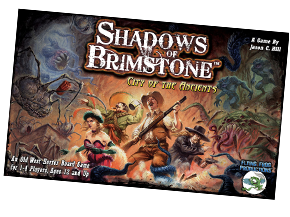