Tristan Hall and his company Hall of Nothing Productions made the excellent Alien-ish game Lifeform, and after sending me that game, followed it up with a copy of Shadows of Kilforth, a card-based fantasy adventure game and the standalone sequel to Gloom of Kilforth. The Kilforth games (as a completely irrelevant aside, the fantasy world I invented when I first began to play Dungeons & Dragons at the age of 12 was called Midforth!) have been described as being a bit like Arkham Horror, in that you visit locations, engage in combat, and roll ability-based dice tests, eventually to face a Big Bad—but instead of a static board the world is made up of a random grid of 25 cards, so the layout varies greatly every game. I haven’t had a chance to play it yet, but it gets good reviews, apparently is a fun adventure game experience that creates emergent stories, and is especially suited for solo play.

There’s only one point on which I don’t see eye-to-eye with Tristan, and that’s the artwork. He is extremely proud of the quality of the art he commissions, and a lot of people lavish praise on it; but personally I find some of the art here feels generic and occasionally tacky, with a significant emphasis on oiled-up beefcake men and big-breasted cheesecake women, almost all of the same age and ethnicity, who look like they’ve stepped off the cover of a cheap romance novel. Perhaps I have a different definition of the word ‘fantasy’ in this context, but it does get in the way of my immersion in the theme. But I must emphasise that I seem to very much be in the minority with this opinion, so I leave you to judge for yourself!

The game itself includes a summary and reference sheet, but here’s my version. Enjoy your adventures in Kilforth! 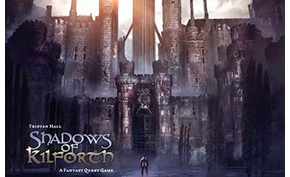