As the incarnation of the Knights of the Round Table, you join forces against the game itself in an attempt to protect Camelot.

A great co-operative boardgame where Questing Knights battle the dragon, search for the Holy Grail, fend off invading barbarians and destroy besieging engines. Get a group of valiant Knights and Ladies together, a few cups of wine and mead, and together save the kingdom. Just watch out for that Traitor.

Days of Wonder don’t release many games, but when they do it’s time to break out the wallet and go grab a copy, because they’re almost always something very special. Shadows Over Camelot is no exception.

This is one of the very early co-operative games, in which attempt to defeat the game, instead of each other. I had misgivings when it first came out, but of course the game is completely successful. Plus there’s the added spice of one player possibly being a secret Traitor, whose object is to help everyone lose and thus win the game for himself.

Days of Wonder really pulled out the quality stops on this one. Not only do you get a main board and three supplementary boards, beautifully illustrated cards and ‘character sheets’, but also thirty nicely sculpted plastic figures to represent your Knights, several Relics (the Holy Grail, Lancelot’s Armour and Excalibur) and a bunch of Siege Engines, Saxons and Picts. Obsessives like me can paint these up to make the game even more attractive.

The game initially seems complex but is actually quite easy to play. Basically, each player is forced during his or her turn to make a ‘Progression of Evil’ action (usually drawing and playing a Black card or placing a Siege Engine around Camelot) followed by a Heroic Action (usually embarking upon or attempting to fulfill a Quest). You place various combinations of White cards on the Quests versus the Black cards that are mounting up. If you win the Quests, you get extra cards, lives, and most notably, White Swords to be placed on the Round Table at Camelot. Losing takes away lives and adds Black Swords to the Table. If you manage to avoid Camelot being totally besieged or everyone dying, a majority of White Swords at game end wins the day.

Of course various special White and Black cards spice things up. Before long you’ll find Camelot besieged, Picts scrambling out of the forest and Saxons running up the beach, Knights desperately trying to complete Quests before it’s too late, and everyone laughing, groaning and cheering with the draw of every new card or roll of a dice. As I said, players can co-operate, but can only share cards in special circumstances, and even then information can only be given away in character. So instead of saying, “can someone give me a Fight card of value 5 to help beat the Saxons” you’ll soon be intoning “My Lord, I feel I can hold the barbarians at bay for just one more day, but surely my forces will bow under their onslaught if I do not receive fresh reinforcements post-haste!”.

Of course should one of the players have been secretly dealt the Traitor card, they’ll be sneakily doing their best to undermine everyone’s careful co-operation. 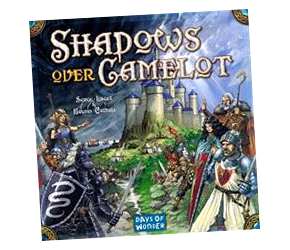