A strategic tactical cooperative board game for 1 to 4 players colonizing a primordial planet.

I’ve been been putting many, many hours of personal time into the Esoteric Order for about 8 years now, and occasionally someone makes it especially worthwhile by astounding me with their generosity and kindness. In this case it was Petr Sorfa, a reader who decided to send me a full pledge for the game Sine Tempore—and even paid for the shipping from the US to NZ.

When I got my jaw back off the floor, I accepted his amazing offer. When the box arrived not only was it was packed to the gunwales with miniatures and stuff, but there was another huge box, appropriately called ‘The Black Hole’, that was even more stuffed with expansion material.

Sine Tempore (‘without time’) is a pretty classic miniatures-battling-on-map-tiles game with an interesting twist: a large clock-like dial called the momentum, that tracks the action point use of the miniatures. It’s a clever change to the usual tyranny of the turn order, and I’m hoping it gives the game a whole new dynamic flow. Theme-wise, players co-operate as the heroes of a expeditionary force ‘settling’ a planet. Unfortunately the planet is already claimed, which really makes me wonder why the ‘heroes’ don’t piss off somewhere else and find another planet of their own … but perhaps all will be made clear in the included campaign.

I’ll let you know what the game is like when I’ve had a chance to play it, because up until now I’ve been busy painting up all the minis from the core set, and creating this rules summary for Petr and all the other Sine Tempore players out there. Unfortunately, the rulebook suffers from the usual problems suffered by Kickstarter campaigns of this type—I’ll never understand why publishers put so much effort into their games, but then don’t get their rules professionally written—but I’ve put many hours into making this summary, which I hope will make it much easier for players of the game to understand how to play.

So thanks again to Petr, who sent me this Sine Tempore out of the kindness of his heart. Do you want a rules summary for your favourite game? Well, dare I say it, you know what to do … 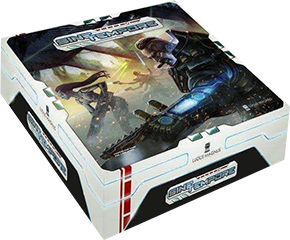