Undermine the machinations of rivals, leverage your wealth for advantage at market and pit your gladiators in bloody contest—all with the goal of seeing your house rise to supremacy.

I remember first seeing the film 300 and being highly amused by the over-the-top action and cartoony style, and then seeing it a second time and being strangely moved by its simplistic tale of heroism and honour. Similarly, I initially scoffed at the series Spartacus for its obviously appropriated style, stilted dialogue and reliance on violence and soft-porn sex, only to eventually find the show curiously involving, and eventually becoming a fan. The stories are interesting, the characters evolve, and it has a wonderful sense of abandon and enjoyment (most probably because it is filmed in New Zealand) that sets it apart from the usual clunky action series. It’s obvious the writers are committed, the actors are having fun, and everyone is enjoying pushing the boundaries of what’s acceptable.

Gale Force Nine, previously known for creating game counters and terrain, made some smart decisions with this, their first boardgame release. The game is well-produced and the rules are fun, but most importantly, it captures the back-stabbing and violence of the series by mixing freeform deal-making (and breaking) and arena combat.

This rules summary and reference, which includes the rules from the The Serpents and the Wolf and The Shadow of Death expansions, should make your games of Spartacus easier to play, as well as bloody and treacherous! 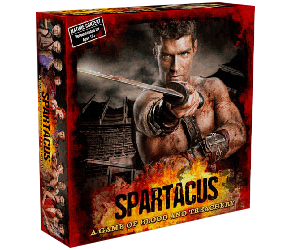