Two great commanders – one epic siege – win or be forgotten!

Keep your co-ops, there’s nothing like a good, meaty, competitive two-player game, and Stronghold is a classic example of the form. One player controls the invading army of savage orcs, the other the human defenders of the mighty stronghold. Can the humans stop the orcs from breaching their walls? Can the orcs bring enough strength to bear to overrun the human’s defences?

Through clever, asymmetric gameplay Stronghold brings this conflict to life. The orc player has a sequence of actions that start with drumming up units and harvesting wood, go through building siege engines and conjuring magic rituals, and end with manoeuvring troops and attacking the walls. Ingeniously, each time the orc player completes an action, the defender gets a number of hourglass tokens to spend on defensive actions: shoring up the defences, training troops, and sending out spies, just to name a few. Already you have a recipe for agonising choices: how many units does the orc player use each action, when more units means more time for the defender to make the stronghold stronger?

Each round ends in an assault phase, where cannons fire, marksmen shoot, and orcs assault the walls. It can get a little mathy at this point, and personally I prefer not to pre-calculate my odds too much, but there’s plenty of opportunity for the most pedantic Euro-game player to devise strategies. If the defender can hold out for seven rounds without the castle being breached, he wins. If the orc breaches the wall at any point, however, it’s all over for the humans; and I doubt they’ll be offering generous terms of surrender …

Stronghold is a fantastic game by Ignacy Trzewiczek (of Robinson Crusoe: Adventure on the Cursed Island fame) that only gets better with repeated play. It’s only failing (apart from the not-quite-there graphic design) is the atrocious rulebook – unforgiveable for a second edition – that is inconsistent with its terminology and spreads rules around the rulebook and the reference sheet with abandon. Hopefully this rules summary and reference sheet will ease the process of learning this rewarding game. 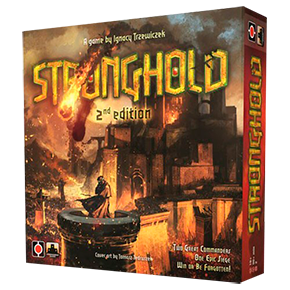