Rebel and Imperial fleets fight for the fate of the galaxy

The nimble star fighters of the Rebellion and the Imperium (and some galactics scum and villainy) have fought it out in Star Wars: X-Wing for a while now, and now FFG brings us a whole new scale of spaceship combat in Star Wars: Armada. Yes, it’s all Star Wars all of the time lately, and we still have a brand new film on the way. No pressure, Mr Abrams.

Thankfully, this isn’t just a cash-in super-size of X-Wing, but an original, engaging, tactical spaceship combat game that’s probably the best of its type. It sure ain’t cheap – the starter set could certainly have been better value – and a flow of expansions will keep you dipping into your wallet, but it does capture the feel of huge, lumbering spaceships with a clever system that forces you to order your ships ahead of time – the more turns ahead, the larger and more ungainly the ship. Around the big ships zip squadrons of TIE fighters and X-wings like busy gnats, and I think it’s the contrast between the two systems that control the ships and the squadrons that gives the game its epic feel. 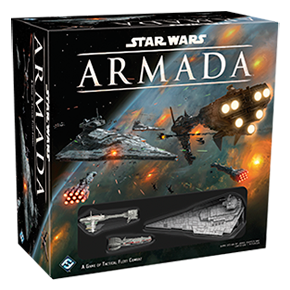