Explore the galaxy, defend the U.S.S. Enterprise, complete the mission.

I’m definitely more of a Star Trek guy than a Star Wars guy. Perhaps because I was a little older when the latter came out, and TV re-runs of Kirk and Spock and the gang made more of an impression on my little mind. (To be honest, the scifi show I loved the most as a little tacker was Lost in Space.) But there really don’t seem to be too many really good Star Trek games out there, which is strange considering the popularity of the franchise. I’ve had my eye on Star Trek: Ascendancy (2016), but I don’t like buying a game that is 3-player only and then being forced to buy more packs just so it can accommodate more players (plus, apparently there’s a lot of downtime). Star Trek: Frontiers (2016) is based on Mage Knight, one of my least favourite game experiences of all time. There’s a game that’s very similar to X-Wing and a dry one by Reiner Knizia.

Well, it isn’t this one, because this is based on Castle Panic, a light tower defense game. That doesn’t mean it isn’t fun though! And it looks spectactacular as the 3D cardboard Enterprise in the centre of the board quickly becomes covered with damage tokens and destroyed hull sections. As fast as you draw new threats from the bag and place them on the board, you’ll be playing cards to shoot them, repair the ship damage, and hopefully – somewhere in the midst of the chaos – completing your five missions. The latter are all based on episodes of the original series and bring a lot of theme to the game.

It’s straightforward, almost completely based on luck, and easy to play. It’s a fun way to pass an hour or two – especially if you’re an old Star Trek fan like me. 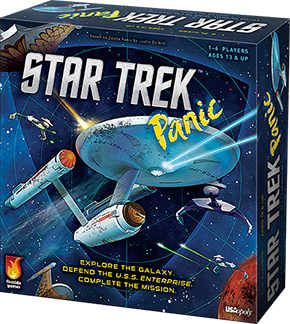