The epic conflict between the galactic empire and the rebel alliance.

Fantasy Flight finally brings us the big Star Wars game we were expecting, and for the most part it’s a satisfying, very assymetrical, epic game with a big emphasis on the personalities of that galaxy far, far away. The Imperials are powerful and threatening, and those plastic death stars really do terrify as they move slowly from system to system. The Rebels are outgunned and it can be discouraging to play them at first, but they can send diplomatic missions to planets to gain their loyalty, and nibble away at the Empire’s strength with sneaky missions. All the while the Rebels are trying to keep their base hidden from the bad guys.

The combat system is strangely clunky and unsatisfying and the box is ridiculously large for the contents, but if you have even an iota of love for Star Wars and would enjoy a good long and involving boardgame set in its universe, you’ll enjoy Star Wars: Rebellion. And the big bag of gorgeous little plastic miniatures included is a fan’s delight. 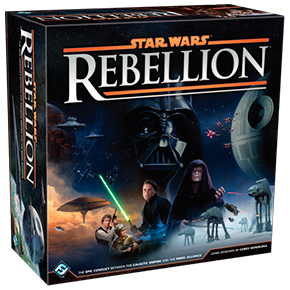