SInce the early days of Risk, there have been many examples of the ‘dudes on a map’ genre, with factions battling for control over expanses both historical and fantastical. Steamwatchers manages to bring a fresh approach to the genre, with a strong theme and some interesting and challenging twists.

The first thing that strikes you is the lavish production. There are seven factions in the large box, each with unique sculpts for standard and elite troops and their own spacious storage tray, and along with a large and beautiful map (I have the larger neoprene version which is even more impressive) and numerous sculpted plastic markers, the game looks gorgeous on the table. Set in a post-apocalyptic frozen world, it’s also a nice change to see the Euro-centric feel of the game. All of the factions come fleshed out in a booklet describing the world, with just enough information to set the scene but not enough to hinder your own imagination.

In the world of Steamwatchers, not surprisingly, the focus is on steam, represented by clever stackable columns of clear plastic ‘clouds’. Controlling the areas where steam columns appear is crucial to increasing your geothermic resources (GEO) level, the game’s equivalent of victory points. However, like most things in Steamwatchers, there’s a price to be paid, because hanging around the steam causes your incubation level to rise, which can increase the radiation affecting your clan and reduce your options during your turn. Unlike many games of this ilk, your clan becomes less powerful as the game progresses rather than more, as your clan board begins to fill with quarantine tokens that restrict the number of units you can field on the board, reduce your special action options, and lower the amount of precious algofuel you can store. But hang around for the steam to subside, and you can build a GEO-scoring farm in the area. Of course, you won’t be meeting these challenges without other clans eventually wanting what you’ve worked so hard to build …

The turn order system is an ingenious one that allows you to select special ability roles each turn, like drawing the valuable archaic event cards that can change the parameters of what happens during the turn, or having more choice over where steam appears. Order tokens are placed in controlled areas and revealed simultaneously. When you activate an order, there are numerous options to move, force march, mobilize troops, and defend, and you can make game-changing large moves across the map’s ice floe areas by bartering contracts with the ‘careeners’, the game’s equivalent of seafarers. But inevitably, of course, you’re going to muscle in on someone else’s territory, and combat will ensue!

Here’s where we get to my only criticism of the game, and it is a purely personal one. In addition to the strength of your troops, and possible support from troops in adjacent areas, you can add an amount of algofuel to your strength dial in combat. Dials are then revealed, in a way similar to games like Scythe and Dune. Unfortunately this reveal has little tension and surprise, because you can see how much algofuel your opponent has and make a pretty good estimate how much they will be willing to spend. This is certainly fine from a tactical point of view, but I miss a bit of a random element here, or something that could increase the level of risk and unique outcomes, like special battle cards. Again, it’s a purely personal preference, and some players might prefer the predictability.

But in every other respect, Steamwatchers is a beautiful, entertaining and challenging game. The replayablity is also off the charts: three expansions make vast changes to the game landscape, adding leaders, alliances, vassal clans, and even three-truck-long armoured caravans with special tech! Not only that, but there’s a wide selection of special scenarios with different victory conditions. There really is enough here to keep the most avid ‘dudes on a map’ fan busy for years.

I was very happy to see the rulebook is good, though there is one crucial rule rightly emphasised in the FAQ. I hope my rules summary and reference makes it even easier for you to enjoy this excellent game; of course, it includes the expansion rules. Keep your eyes on your steam!

PS: Mythic Games sent me a copy of Steamwatchers for review, and commissioned this rules summary and reference. As always, opinions are my own. 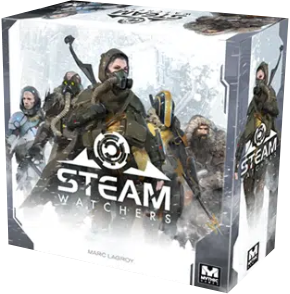