The year is 1881 and the ‘Old Ones’ have been ruling the earth for over seven hundred years.

The respected game designer Martin Wallace recently proved himself a man of taste by doing exactly what I did, which was move to New Zealand. Though I have none of his games in my collection for some reason, I was drawn to this one because of its theme, based as it is on a Neil Gaiman short story that briefly and amusingly mashes H.P. Lovecraft and Arthur Conan Doyle together—or more accurately their creations, the Cthulhu Mythos and Sherlock Holmes.

A Study In Emerald simulates the machinations of two groups in an alternate Victorian-era world conquered by Lovecraft’s Old Ones: the Loyalists (loyal to the Old One-dominated ‘royals’ and the existing world order) and the Restorationists, a semi-terrorist organisation determined to return mankind to hegemony over the planet. During a game, you’ll gather all manner of Victorian, Holmesian, and Lovecraftian-themed forces into your deck of cards, a deck which you will continually recycle in time-honoured deckbuilding fashion. Using these cards, you place influence on other cards so as to add them to your deck, increase its strength, and use their abilities to amass victory points.

The card illustrations are done in lovely period style, though the board is a somewhat lurid mess of pink and green and the rulebook could have been done better. As for the game, despite the nagging feeling that everything including the kitchen sink has been thrown in, somehow it all comes together thematically and mechanically and results a fun, engaging and atmospheric experience to the end, with a nice sting in the tail when allegiances are revealed and final scores totted up. Of course I’m a sucker for Victorian England-meets-Cthulhu. The game is afoot! Cthulhu fhtagn! 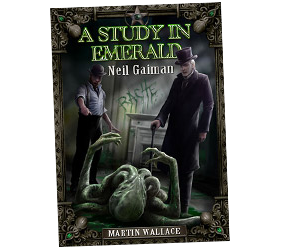