The men and women of the 42nd Marine Special Forces, and the mysterious and deadly Obscura Korps of the Reich, locked in a struggle to recover the Obscura Cardinal Stones.

The French company that created this game may have borrowed the whole occult Nazis thing from Hellboy, but the alternative history magic-and-technology WWII milieu was just waiting to be given the game treatment. The result is this fast, richly thematic combat skirmish game. The game looks great but the original French rules translation was terrible; thankfully Fantasy Flight Games bought the game and updated and revised the rules completely.

The main distinguishing feature of the game is the Pathfinder system, a series of coloured circles printed on the large format boards that regulate combat and line of sight, speeding up play greatly. The game and its expansions come with very nice pre-painted miniatures and top-quality components.

My original rules reference pack includes card-sized references for the equipment packs used by the various characters. The revised FFG rules summary does not include equipment pack cards, for copyright reasons, but also includes rules from all three expansions so far. 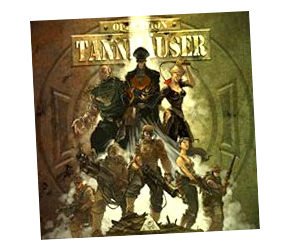