Coming to Mars was a big step …

Now that I’m allowing some of my Patreon backers to vote on upcoming summaries, I’ve started to throw one or two games on the list that I don’t actually own, but that are very popular with boardgamers worldwide. Terraforming Mars is such a game—number four on the Boardgamegeek ratings as of this writing.

Turning Mars into an Earth-like planet is certainly thematic but, though I completely understand why the game is so popular, I’m not really a huge fan of resource management and I find the game’s graphic design a little on the uninspiring side. So I haven’t played the game myself despite its popularity—perhaps I’m missing out?

But any case, here’s my rules summary and reference for Terraforming Mars, and I hope the game’s many fans find it useful! 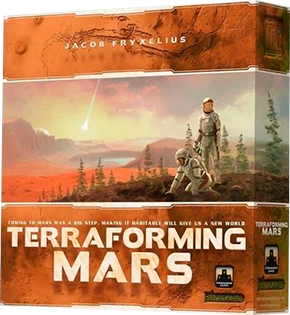