The End of the Triumvirate

It is the year 56 B.C. The Roman Republic is torn by civil war.

The setting is that period of history when the fate of the Roman republic rested in the hands of three men: Caesar, Pompeius, and Crassus, and explores what would have happened if these three had engaged in civil war. As you can tell from the title, this game is definitely best with three players, though, less satisfyingly, it can be played with two. There are three ways to win: politically (a player must win the election to Consul twice); militarily (a player must control nine regions); or a mixture of both. It’s a cleverly balanced and very strategic game, more Euro game than wargame, and gives the player some interesting insights into the Roman world and its struggles for power.

The End of the Triumvirate Rules Summary v1.1 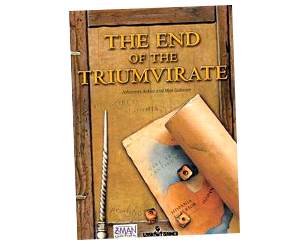