There have been several versions of Warhammer 40,000 at 6mm ‘epic’-scale from Games Workshop—from the original Space Marine to the later ‘specialist game’, Epic Armageddon – but for my money Epic 40,000 was the best of the lot because it took the emphasis off fiddly unit special rules and concentrated on delivering a fast-playing, fun game. In fact game designers Jervis Johnson and Andy Chambers have publically stated that it was the best set of rules they ever came up with. 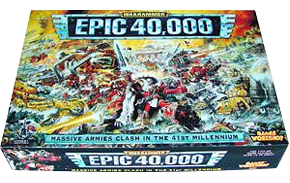