This War of Mine: The Board Game

In war, not everyone is a soldier.

This very unusual game takes itself seriously, and that’s a good thing, because they picked a hell of a serious theme – survival in modern city torn apart by war. Based on the successful video game by 11 Bit Studios and created with the help of a Kickstarter campaign, the Polish company Awaken Games has created an astonishingly professional and thought-provoking game for their debut. Yes, it can be grim and depressing, but there are also small victories and moments of great humanity, and I’ll happily sacrifice a bit of ‘fun’ in exchange for such a different game.

The beating heart of This War of Mine is the almost 2,000 paragraphs in the Book of Scripts, an achievement that rivals Tales of the Arabian Nights, and in my view surpasses it, because the stories are far more coherent. In several plays I’ve come across some gut-wrenching decisions and horrifying situations, and frankly I applaud the publisher for not shying away from the grim realities of their theme.

While there’s a rough rule about passing around the book and having a ‘leader’ at particular stages of the game sequence, the characters are controlled as a group, and I’ve found the game works better if the players all discuss the options together and take arbitrary turns at reading out paragraphs and moving components. In fact, it enhances the feeling of us all being involved in a shared struggle to survive.

It’s quite an astonishing game, beautifully produced, and gets my vote for most thought-provoking of the last few years. No, it’s not particularly ‘fun’ – but it’s a fascinating experience, and you really should try it at least once.

The only misstep concerns the rules. In an attempt to create a ‘play as you go’ system, they buried many of the rules among the paragraphs of the Book of Scripts, and it only makes the game more confusing and difficult to understand. Thankfully, this rules summary and reference includes all those rules – so be warned, you’ll lose the advanced rules ‘surprises’ if you use it, but I think it’s a price worth paying for understanding what’s going on.

This War of Mine Rules Summary & Reference v1 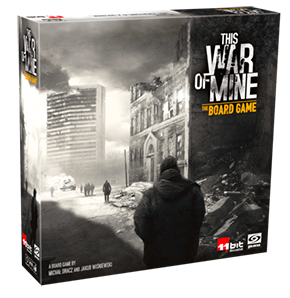